Fill the Form for Quick Enquiry

Riyo Advertisers books advertisements for Eenadu. We accept Display, Appointment, Tender Notice, Public Notice, Obituary, Classified Display and all other types of advertisement. You can give or publish your ad in Eenadu through us.

Eenadu daily newspaper which is the largest circulated Telugu newspaper in the State of Andhra Pradesh and the State of Telangana of India. According to the Indian Readership Survey (IRS)2012, Eenadu ranks at number six among the Indian language dailies with a total readership (TR) of 5,906,000. Eenadu ("This day"; "This country", having two meanings in Telugu) was founded by the Indian media baron Ramoji Rao in 1974. Eenadu's rapid expansion enabled diversification of its portfolio by venturing into other markets such as finance and chit funds (e.g. Margadarsi chits), foods (Priya Foods), film production (Usha Kiran Films), film distribution (Mayuri Films), and a group of television channels (ETV). All the businesses are organized under the Ramoji Group. 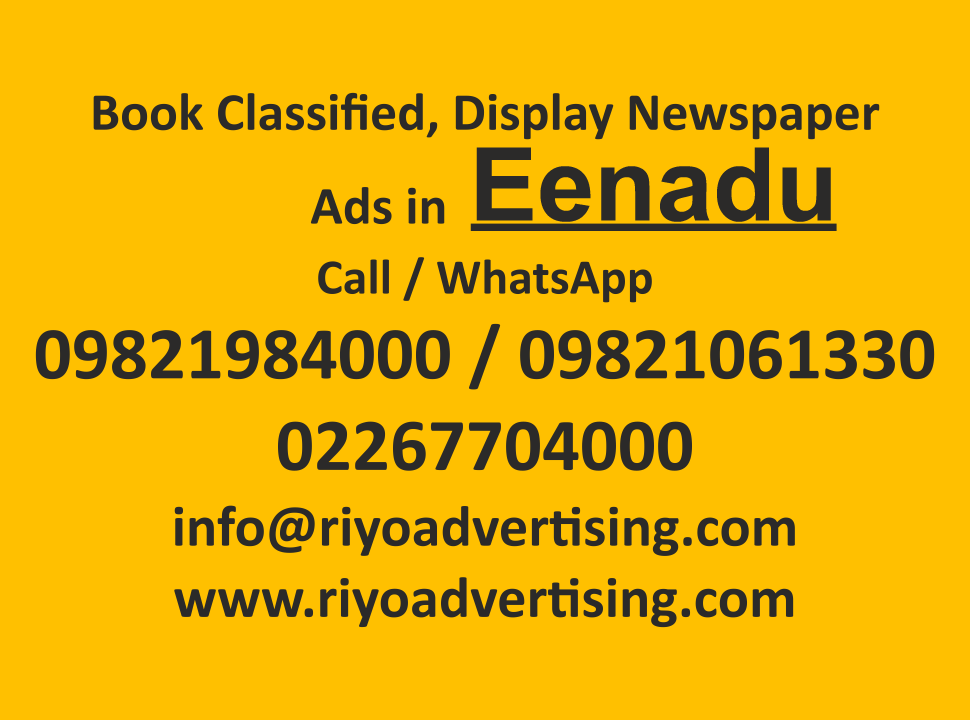 How to Book Ads in Eenadu Newspaper:

Text Classified Ads in Eenadu Newspaper : –Text ads of small sizes (Classifieds) can be booked with easy text style and some part of the text can be highlighted with bold or capital letters. Display Classified Ads in Eenadu Newspaper - These ads have better visual effects to attract readers. It can have logos or other visuals supported by the text lines which can be booked in black and white or colour. How a display ad is different from other classified ads? A display ad is printed in more space like full, half or quarter page or as per requirement. Display ads have better visual effect, and generate better response. A lot of creative work can be carried out in Display ads because of the uses of images, Colours and decorative fonts that are used.

Fill the Form for Quick Enquiry